Kathleen was a second generation New Zealander on her mother Ellen (née VAUGHAN)’s side and her father, George Frederick (known as Fred) REYLING, who was born in Sydney, New South Wales in 1856, was of German origin on his father’s side (1).

Ellen and Fred married in New Zealand in 1887, and had five daughters, who were bookended with two brothers, one the oldest and the other the youngest child in the family.  Fred worked as a painter and supporter of the wider labour movement in the role of secretary of the Wellington Trades Council and secretary of the Wellington Painters’ Union (2).

Between 1896 and 1914 the family lived in King Street then Drummond Street in Mount Cook, then Reuben Avenue in Brooklyn and finally at 10 Russell Terrace, Berhampore. Kathleen attended Mt Cook Infants School and Mt Cook Girls School.

A 1906 newspaper entry records Kathleen Reyling helping with the picture and art stall at the St Mark’s Churchroom fair (3).

Kathleen trained to be a teacher and qualified in 1910 (4), continuing to study education and English language and literature at Victoria University in 1912 (5) while she worked as an assistant female teacher at South Wellington School from 1912 to 1915 (6).  She seems to have maintained a connection with the Anglican Church and to have been able to turn her hand to what was needed judging by the contribution of a recitation she made at a community musical event for Riverton hospital patients where she may have been holidaying at the very end of 1913 (7).

Fred Reyling died in September 1912 and was buried in the Roman Catholic section of Karori Cemetery. His funeral was well attended, and those present included all the secretaries and many of the members of kindred unions. Wreaths were sent by the Otago Trades Council, the Wellington Trades Council, the Seamen’s Union, the Painters' Union, the Painters' Federation, and by ’fellow secretaries’. Mrs. Reyling received telegrams of condolence from Labour men throughout the Dominion.

In 1916 Kathleen’s took up employment at Cross Creek School. Cross Creek was the base of operations for the railway line, known as the Rimutaka Incline that traversed the Rimutaka ranges between Wellington and the Wairarapa. There was a significant settlement of railway workers at Cross Creek and a tight-knit community, large enough to require a primary school to provide the education of children whose fathers worked on the Incline. The school opened in 1883 and operated until 1953. Cross Creek is located approximately 12km south of Featherston in the Wairarapa.

Kathleen may have taken up the job at Cross Creek to be near to her next youngest sister, Nellie, who had married Albert WHELDON on 31 October 1915. Albert, son of William and Eliza Wheldon of Leicestershire where he had been born in 1890, had immigrated from England in 1906/7, and worked as a railway fireman at Cross Creek. Albert and Nellie had two daughters in rapid succession, Elsie Joan in 1916, and Sybil Vaughan in 1917, so having an aunt close by to lend the family a hand would have been a godsend.  However, in May 1917 Albert was transferred by Railways to Marton (where Sybil was born), another busy railway junction, in the Manawatu and his family accompanied him, while Kathleen stayed on at Cross Creek.
​
In April 1918, however, Albert was taken into Trentham military camp for training. His next of kin was his wife Nellie who was resident at Kapanui, Marton. Not long after the birth of Sybil, Nellie had become pregnant again. In November 1918 Albert became sick and was admitted to the cottage hospital at Trentham Camp on 8 November. His condition worsened and after 13 days in hospital, he died on 20 November. He was buried in the newly opened Soldiers section of Karori Cemetery 2 days later. 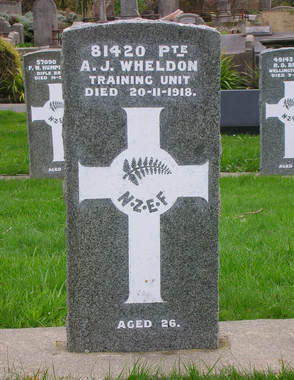 The Army made a compassionate payment of £140 to Albert’s estate to assist with costs his family would face, and the Public Trust was also able to identify about £160 in a life policy belonging to Albert (8).  This would of course been immensely helpful to Nellie - had she survived to bring up their children on her own. This, however, was not to be.

At some time during 1918 Nellie must have taken her two daughters to her parents in Wellington to help with their care, particularly as she was pregnant, and perhaps while she spent time visiting Albert in camp and then in hospital. Their third daughter was born in a maternity home at 29 Marion Street 2 days after Albert was buried. The infant lived long enough for the family to insert a birth notice in the Evening Post on 24 November:

WHELDON—On 24th November, 1918, to the late Private and Mrs. A J. Wheldon, of Marton Junction, a daughter.

Nellie however succumbed to influenza and died the same day she had given birth. She was buried 2 days later in the Church of England section of Karori Cemetery. Slightly differently worded death notices were published 2 days apart in the Evening Post:

WHELDON.—On the 24th November, 1918, at a Private Hospital, Wellington, of pneumonia, Nellie, beloved wife of the late Private A. Wheldon. "And with the morn those angel faces smile."
(Evening Post, 27 November 1918)

The Public Trust identified £297 in Nellie’s estate from her interest in her husband’s, which must have been welcome to help raise their orphaned daughters (9).

Kathleen, who had also contracted the flu, apparently left her sick bed to assist with nursing her pregnant sister. Kathleen’s condition worsened and 6 days later she too died. Her home address was given as 10 Russell Terrace, the home of her mother, and she died at the Normal School temporary hospital in Thorndon.

It fell to her widowed mother, Ellen Reyling who had just buried her other daughter Nellie following the death of her son-in-law, Albert Wheldon, to purchase a further separate plot in the Church of England section for Kathleen.

An item about Kathleen appeared in the ‘Women in Print’ section of the Evening Post on 2 December:

The many friends of Miss Kathleen Reyling will regret to learn that she passed away at the Normal School Hospital on Saturday last. Miss Reyling, while suffering from a severe attack of influenza, left her bed on 24th November to attend the death-bed of her sister (Mrs. Wheldon), who with her husband also fell victims to the epidemic. The late Miss Reyling was well known and much loved as mistress of the Cross Creek school.

Kathleen’s probate (10) shows that the Public Trustee administered her estate of nearly $6500 in 2017 values.

A subsequent memorial notice (11) remembered Kathleen with the phrase ‘her duty nobly done’.

Nellie and Albert’s older daughters may have been brought up by their grandmothers. Albert’s mother Eliza, along with some of his sisters, migrated from Leicester to New Zealand in 1921.   For a time both grandmothers resided together in Russell Terrace (12).  The fate of the third daughter, born on the day her mother died, is unknown. There are two birth registrations that may relate to her, one as Alberta and one as Patricia. However, it is also possible that she died shortly after birth, though there is no death record nor a record of her being in her mother’s grave.

Kathleen’s younger brother, Louis John Reyling, a salesman of 52 Clyde Street, Island Bay, joined Kathleen in her grave in May 1937 when he died aged 35.

Researched and written by Jenny Robertson 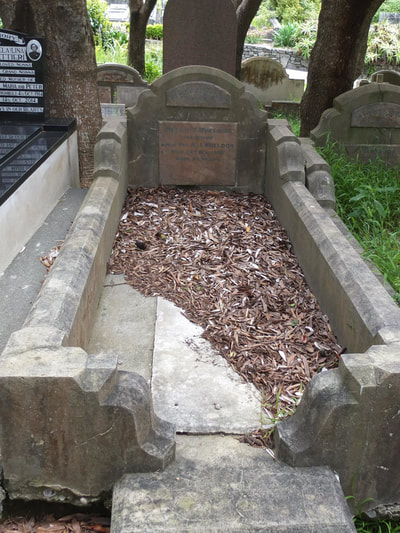 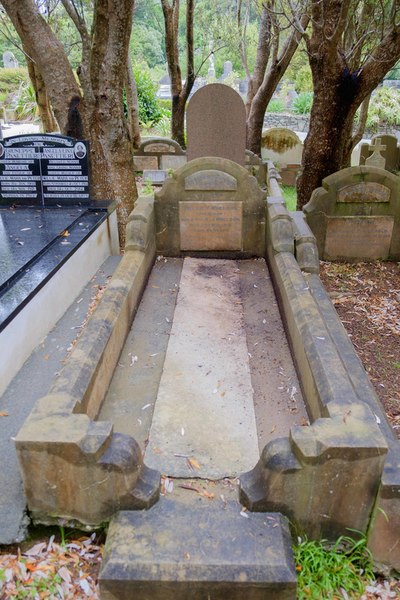 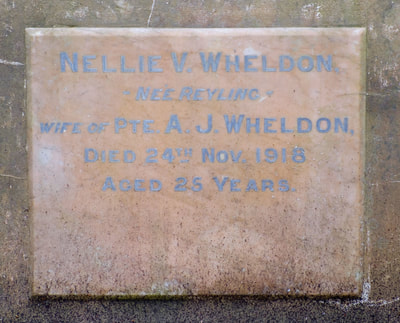 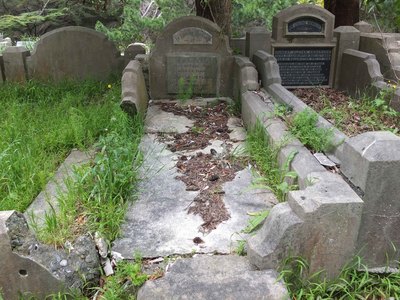 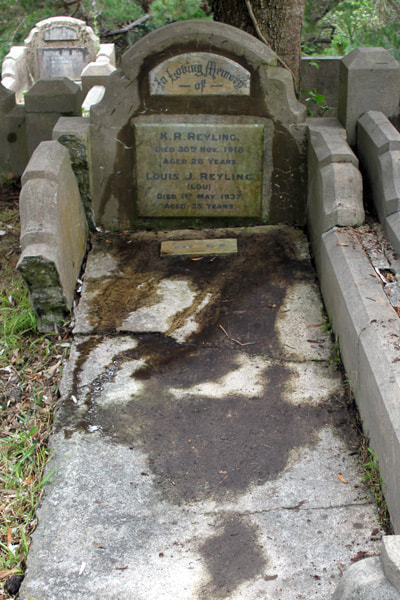 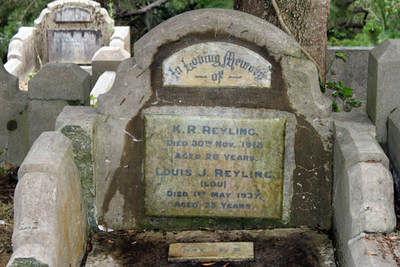